The first quarter is shaping up to be the worst in more than five years for the Northern New Jersey residential real estate market. The decline in residential single family home sales is a trend that began late last summer and is showing no sign of reversal. 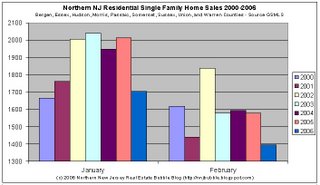 Home sales for the first two months of 2006 showed significant declines compared to prior years, January sales saw a year over year decline of more than 15 percent, and February saw lows not seen for more than six years.