I’m sure everyone will be waiting on the edge of their seats for the Fed Open Market Committee policy statement at 2:15pm (EST) this afternoon. A quarter point rate increase is widely expected by the market. The big unknown will be what the first statement under the Bernanke watch will read.

To get a feel for how the Fed Funds Rate affects the mortgage market, I’ve included a graph from Bankrate displaying the 30y-fixed, the 5/1 ARM, and the 3/1 ARM. 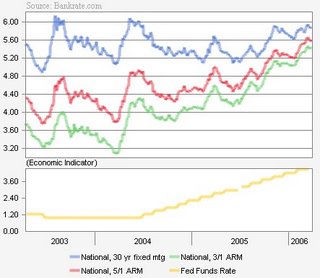 The graph illustrates Greenspan’s conundrum perfectly. While the short term mortgages moved up in lock-step fashion with the fed moves, the 30y seems almost disconnected. Well, it is disconnected, as the 30y has more in common with longer yield bond market, not the short term. This isn’t to say there has been no effect on the mortgage or housing markets, it’s clear that these rate moves are making the current (un)affordability mortgage products even more unaffordable. Another key part of this graph is the spread between rates among products. Look at how wide the spread was in 2003 compared to now.

While we are on the subject of mortgages, sub-prime lender Aames Financial, announced it would cut 100 jobs in it’s Florida and Parsippany, N.J. locations citing a difficult mortgage market.

Cutting costs in reaction to a tough mortgage market, Los Angeles-based sub-prime lender Aames Investment Corp. said Monday that it would close offices in Deerfield, Fla., and Parsippany, N.J., and eliminate 100 jobs in its wholesale lending division, which makes loans through mortgage brokers.

18 Responses to Waiting For Bernanke