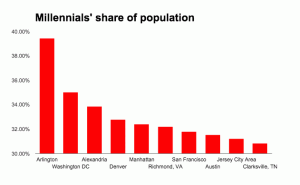 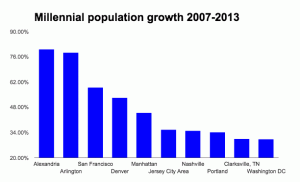 Renting Less Affordable Than Buying in Most U.S. Markets But Not Where Millennials Are Moving Most

Buying a median-priced home was more affordable than renting a three-bedroom property in 68 percent of the counties analyzed, representing 57 percent of the total population in those counties.

But in the 25 counties with the biggest increase in millennials between 2007 and 2013, fair market rents for a three-bedroom property in 2015 will require 30 percent of the median household income on average while buying a median-priced home requires 36 percent of median household income on average. For the analysis millennials were defined as anyone born between 1977 and 1992.

“First-time buyers and potential boomerang homebuyers are stuck between a rock and a hard place in today’s housing market: many of the markets with the jobs and amenities they want have hard-to-afford rents and even harder-to-afford home prices; while the more affordable markets have fewer well-paying jobs and tend to be off the beaten path,” said Daren Blomquist, vice president at RealtyTrac. “Those emerging markets with the combination of good jobs, good affordability and a growing population of new renters and potential first-time homebuyers represent the best opportunities for buy-and-hold real estate investors to buy low and benefit from rising rents in the years to come.” 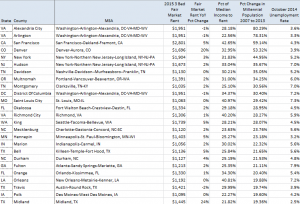 This entry was posted in Demographics, Economics, Housing Recovery. Bookmark the permalink.