Trumponomics In The Housing Market

With the market soaring high on Trumponomics (the belief that Trump’s business experience will fix the country), we should take a look at some of the “unnecessary regulation” that might seem ripe for elimination. Before getting into this, it is important to stress that this is not a political article. This article is going to focus strictly on the impacts regulation has on housing prices and the impact housing prices have on the economy. 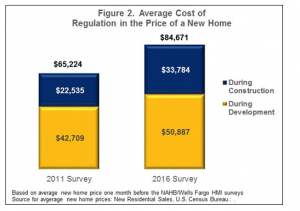 17 Responses to Cost of regulation holding back new home sales/construction?