CoreLogic released their monthly delinquency data yesterday, deep in there was an important little stat on the overall foreclosure rate, which NJ has been at the top of the charts for the last two years. For at least the last year, NJ has been resolving foreclosures at a faster rate than our neighbor, and we’ve finally given up our #1 position to NY – which is now takes the illustrious position of having the highest foreclosure rate in the nation. We should see the NJ fall below NY for delinquency as well in the next few months. 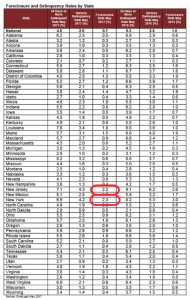 66 Responses to New York – Highest Foreclosure Rate in the Nation