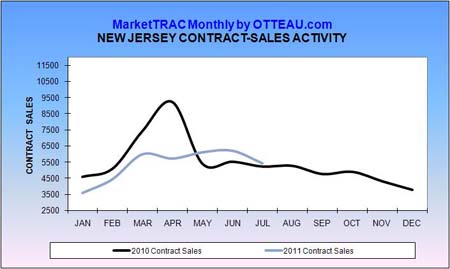 Although home purchase contracts in July exceeded the year ago level for the 3rd consecutive month, they appear to be losing strength along with the rest of the economy. During July, the rate at which home buyers signed contracts to purchase existing and new homes was 4% higher than one year ago which follows a 12% increase in June and 13% increase in July. Considering that these recent gains follow 12 straight months of declining purchase activity should be good news for the housing market. But the declining strength of the increases coupled with slowing job growth, recent stock market losses and the debt ceiling crisis suggest that the housing stabilization may be crumbling.