The 19 hottest real estate markets in N.J. are surging

Time to separate the wheat from the chaff.

New Jersey’s real estate market has been fairly fractured since the Great Recession ended in 2009. A slow recovery has meant many are still waiting for their property values to recover, but that’s certainly not true across the board.

A handful of towns are seeing incredible demand and, combined with low inventories, prices have been skyrocketing in recent months.

The 19 towns below all, according to real estate tracking giant Zillow, have seen their median home values peak at the start of 2017. We used Zillow’s own Home Value Index for our analysis (methodology here) and excluded shore communities where there is a strong secondary home market.
Each of these towns stand a head and shoulders above New Jersey’s statewide price growth during the last year and some have seen home values soar to remarkable heights.
…
These towns are not only bucking the overall trend, but many have blown past the value they had prior to the recession.
…
A common thread? Trains 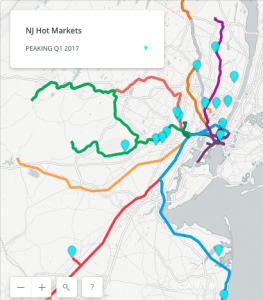 The most easily identifiable trend among NJ’s hottest towns is clear — access to transit. Each of the towns are within minutes of an NJ Transit station, which despite the transit service’s recent woes, remains a tremendous draw for prospective home buyers.

This entry was posted in Economics, New Jersey Real Estate. Bookmark the permalink.

108 Responses to When will the rest of Jersey follow?