The housing market continues to show signs of slowing, but very little evidence of the “bursting bubble” that has been predicted for more than three years by some prognosticators. One sign of slowing is the level of unsold new homes.

There are now nearly 200,000 more unsold new homes under construction than there were just five years ago. Rapidly rising sales have masked the surge in construction.

Most analysts focus on the months of new-home supply, which is shown below. Since hitting a low of 3.5 months of supply in the summer of 2003, this number has gradually increased to its current value of 4.9 months, its highest value since December 1996.

Take it with a grain of salt as it comes from a real estate news service. However, with exising and new home inventories breaking records almost daily, I can’t believe that the situation is still being described as “slowing”.

Demand is already declining quickly, as it does so ‘months supply’ will begin to skyrocket to levels seen in the early nineties. 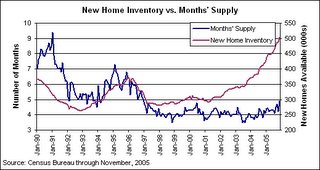 Interesting that this is supposed to be a “January” report card, yet most of the real estate statistics being quoted as justification for the ‘grade’ were from November (and a handful from December).