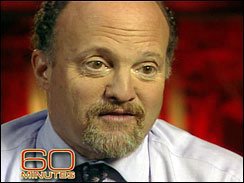 Always an optimist, he nevertheless believes that the real estate bubble is about to burst.

“I think real estate is very similar right now to what the dotcoms were like in 2000. Everybody thinks you can’t miss with real estate. Actually I shouldn’t say that. In the last five months, I think it’s starting to dawn on people that real estate can go wrong,” says Cramer.

His comment got me wondering, just how similar is the trend seen in the Nasdaq circa 2000 to the housing bubble today? I plotted the closing price of the Nasdaq index from 1985 to 2005 on one scale, on the other I plotted the Newark-Union, NJ-PA MSA house price index data (This is the same dataset RentingInNJ used in a piece a few weeks back). 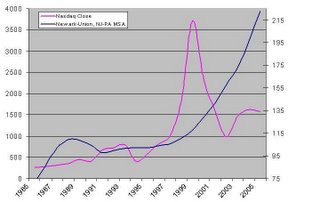 Please note the scales are adjusted to that the peaks and troughs of the trends fall at similar levels. However, the trends do point to an interesting relationship. How much of our local housing bubble was due to the run up in the Nasdaq beginning in the late 90s? Wages were tremendous in Northern NJ/NYC during the dot com era and many portfolios were bulging at the seams. However, the graph clearly shows (again), how steeply prices have increased in a relatively short period of time.

18 Responses to Real Estate Like The Dot Coms – Jim Cramer