November sales data is in! Regular readers will likely recognize this graph, I’ve been updating it each month for a few months now. For new readers, this graph shows year over year unadjusted sales for 2003, 2004, and 2005. The reason I think this graph is important is that it shows the normal seasonality of the real estate market and allows comparison of current sales with historic sales for the last 2 years. This graph is based on GSMLS sales for the counties specified on the graph only. It does not include NJMLS or other FSBO sales. However, due to the fact that GSMLS is the largest MLS system in this area, I have faith that this graph illustrates the trends just fine. This data alone would be inadequate to use on a county level. Also, just because I get asked every time I post this. An analysis like this on a city by city level would be inappropriate, the sample size is much too small thus making the data too volatile, it’s only when you look at multiple counties aggregated that you get a true picture of activity. 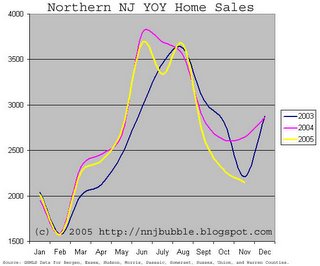 I think this data illustrates the anecdotal evidence we’ve been hearing about perfectly. Unlike the NAR and NJAR data that contains data up to 4 months old, this data is ‘fresh’. We can see that sales fell off relatively quickly after the summer peak come in significantly below last years numbers. It will be interesting to see how we track through the traditionally dead February. If you thought DOM numbers were getting high now, just wait until February.