Jersey and Taxes, Perfect Together

Ever wonder where your federal tax dollars go? And how much we get back for them?

The state of Massachusetts gets 77 cents in federal spending for every dollar that it sends to Washington in tax revenue, according to a study by a tax policy think tank.

The nonprofit Tax Foundation released the results of an annual study which found that states that had more high-cost urban areas with higher median incomes chipped in more federal tax revenues than they got back in spending.
…
Scott Hodge, president of the Tax Foundation, said the disparity for states like Massachusetts has more to do with their citizens earning more money, and less to do with the congressional delegation not doing its job.

“The main culprit is not lazy congressmen who don’t bring home enough pork, but rather the progressive income tax,” Hodge said. The study identifies 18 donor states — those who contribute more to the federal tax pie than they get back — and 32 “beneficiary” states. New Jersey had the distinction of being the biggest donor, with that state only getting back 55 cents for every dollar in federal taxes paid by its residents and businesses. 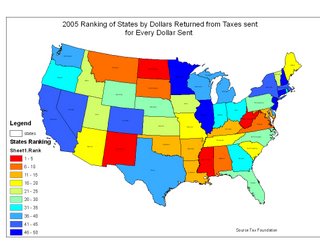 Thanks to metroplexual for the link as well as the graphics. If you think this is interesting wait until you see the migration pattern charts!

8 Responses to Jersey and Taxes, Perfect Together