From the NY Times:

Many Homes Are on the Market and Sales Numbers Are Declining

WHEN the American economy fell into recession five years ago, it was the strength of the housing market that kept the downturn short and mild. Home sales kept rising throughout the downturn, and then took off when the recession began.

But now home sales are falling and the number of unsold homes is at the highest level ever. Housing starts are starting to fall, but remain at a high level by historical standards. If sales do not pick up this summer, when sales are usually seasonally strong, it could be a sign that prices are going to come under pressure and lead to a much larger decline in housing starts.
…
The accompanying charts show year-over-year changes in sales of existing single-family homes and apartments, using six-month moving averages to smooth out monthly fluctuations. The latest figures show sales of single-family homes down 4.4 percent, the largest dip since 1995, and apartment sales off 6.6 percent. Statistics on apartment sales are only available back to 1999, but that is the worst showing in that period.

Meanwhile, the number of existing single-family homes on the market is up 33 percent year-over-year, measured the same way. Figures from the National Association of Realtors, going back to 1983, show no comparable increase in homes for sale. The number of condominiums and cooperative apartments for sale is up 61 percent.
…
The picture is consistent with demand for homes suddenly drying up, while sellers are reluctant to cut prices. Such a standoff could end with buyers returning, but it could also end with prices starting to slip, or with a lot of homes being pulled off the market.
…
But with sales weakening and the number of available homes rising, those who warned of a housing bubble must be wondering if their fears are finally becoming reality. 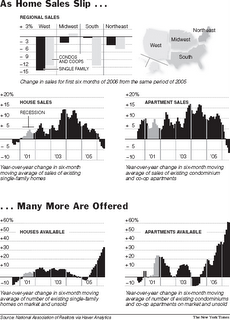