June is an important month for the residential real estate market as it represents the traditional end-point of the Spring selling season and typically sets the high-water mark for home sales in any given year. Thus, the residential market in New Jersey had much at stake as any hopes for a market comeback would fall heavily on the June sales performance.

In June, contract-sales activity ran 9% below May and 24% below June 2005, continuing the pattern set earlier this year and dimming hope for a market comeback any time soon. From an inventory perspective, the number of unsold homes on the market increased by 4% in June adding further to an already saturated market. Year-to-date comparisons indicate a 17% decline in Contract Sales and a 70% increase in Unsold Inventory when compared to last year at this time. Some encouragement can be found in the fact that Unsold Inventory increased by only 4% in both May and June, as compared to a much higher increase in the preceding months of January (+15%), February (+12%), March (+13%), April (+12%), giving some hope that inventory will stop it’s upward spiral. At the same time however, even a modest increase in Unsold Inventory is detrimental to the market given the current high inventory levels.

Looking ahead, the Summer selling season typically brings gentle but steady declines in buying activity followed by more pronounced dips during the Fall and Winter seasons. Add in the effects of rising mortgage rates, record high energy prices, and the erosion of consumer confidence towards the future of the housing market and there’s no reason to expect a rebound any time soon!

From a price perspective, there is mounting evidence that home prices will decline over the short term as motivated sellers make business decisions to accept a lower selling price in exchange for a quicker sale. On the New Construction front, the myriad of sales incentives ranging from discounted pricing on upgrades, mortgage rate buy-downs and other financial incentives are the market equivalent of price reductions which will steer the overall residential market to a lower price point. Given that the New Jersey Housing Market realized an 87% increase in home prices from 2000 – 2005, the adjustments now taking place come as no surprise. Nonetheless, expect a bumpy ride over the next few years as the market struggles to restore an affordability balance in the face of rising mortgage rates and energy prices. 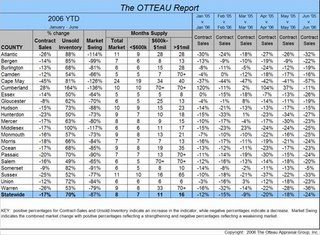 All text and images copyright the Otteau Group.