From the PMI Group (the mortgage insurance company):

(I’m pointing this out because when you are writing insurance against mortgages, it is probably good business to know where home prices are going.) 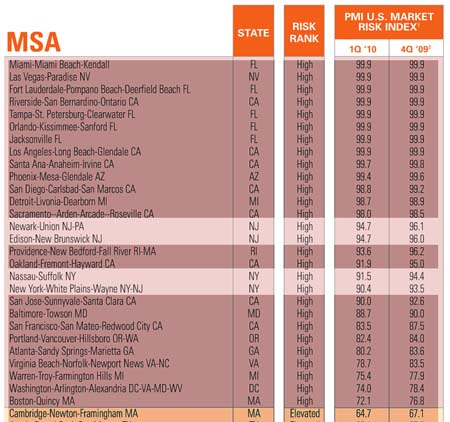 The PMI US Market Risk Index is published quarterly, and attempts to gauge the probability of home prices declines over the next two years. A score of 100 means the index is predicting, with a 100% probability, that home prices will fall.

While the index has improved for Northern NJ in the first quarter of this year, over the 4th quarter of last year, the risk of further home price declines is still extraordinarily high.

The risk index for the Edison-New Brunswick, NJ MSA was also 94.7% in Q1 down from 96.0% in Q4.
* Middlesex County
* Monmouth County
* Ocean County
* Somerset County

Nassau-Suffolk rounds out the NY Metropolitan Area at a 91.5%, down from 94.4%
* Suffolk County
* Nassau County 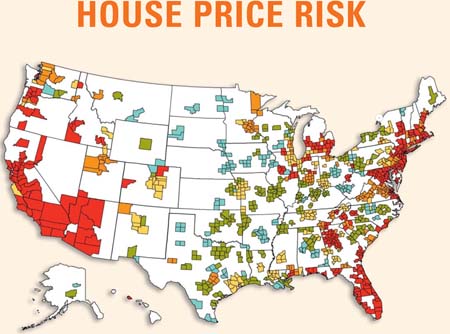 While the PMI Group does break out only the largest metropolitan areas in their reporting, they do provide a graphical illustration of home price decline risk, which shows all of New Jersey and some of the surrounding areas firmly in the red (highest risk areas).