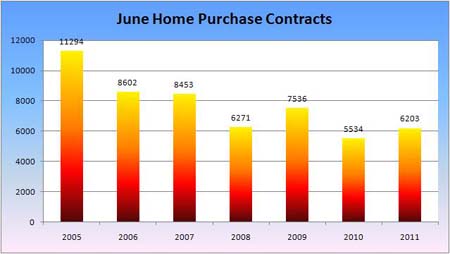 Further evidence of stabilization in the housing market occurred in June as combined purchase contracts for resales and new construction increased by 12% from one year ago. This follows a 13% increase in May, reversing a trend of declining purchase activity over the preceding year. The market’s June performance essentially matched 2008 when the recession was still in its early stages. These recent improvements in the face of weak employment growth, high unemployment and restricted access to credit suggest that housing demand is stabilizing.