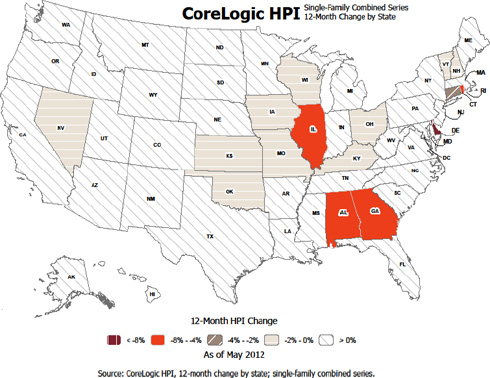 The CoreLogic Home Price Index (HPI) showed that home prices nationwide, including distressed sales, increased on a year-over-year basis by 2.0 percent in May 2012 compared to May 2011. On a month-over-month basis, home prices, including distressed sales, also increased by 1.8 percent in May 2012 compared to April 2012*. The May 2012 figures mark the third consecutive increase in home prices nationwide on both a year-over-year and month-over-month basis.

“Home price appreciation in the lower-priced segment of the market is rebounding more quickly than in the upper end,” said Mark Fleming, chief economist for CoreLogic. “Home prices below 75 percent of the national median increased 5.7 percent from a year ago, compared to only a 1.8 percent increase for prices 125 percent or more of the median.”

This entry was posted in Economics, Housing Recovery. Bookmark the permalink.

156 Responses to CoreLogic HPI shows broad price gains in May