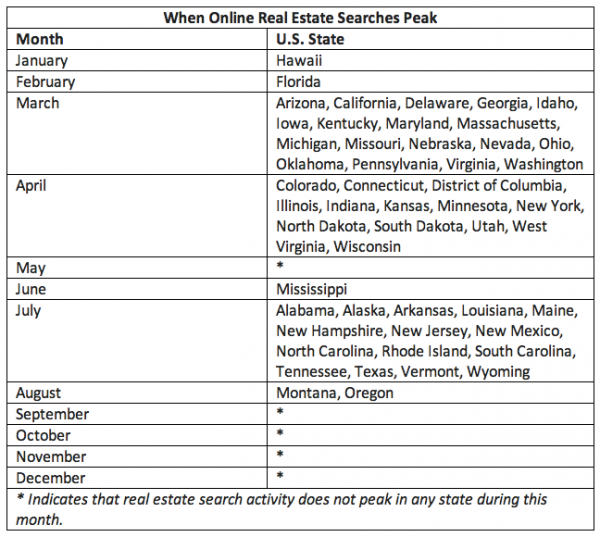 The research, which was based on all home searches on Trulia from 2007 to 2012, was used to determine whether a state’s search activity in each month is above or below the annual average for that state.

The study revealed that post-holiday motivation pushed many potential homebuyers and renters back into full-on search mode at the beginning of the year. Nationally, online real estate search activity surged in January and usually reaches its peak around March or April.

Typically May sees a slight dip, but is directly followed by a second yearly peak during the summer months. Home searches usually dip the lowest in December.

“Home-search activity swings with the seasons in every state. Buyers and sellers can use these ups and downs to their advantage,” said Jed Kolko, chief economist of Trulia. “Sellers looking for the most buyers should list when real estate search traffic peaks. Buyers, however, should think about searching off-season, when there is less competition from other searchers.”

While most online home searches at the state level correspond with typical seasonal patterns, local markets are completely different depending on the market.

This entry was posted in National Real Estate. Bookmark the permalink.