Middle Class in NJ? Sorry to hear it 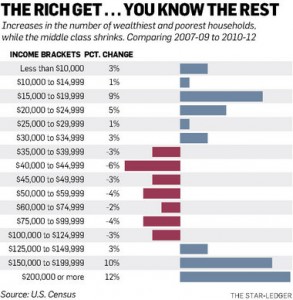 The number of New Jersey’s wealthiest households has doubled over the last decade, and new data from the U.S. Census Bureau show that the middle class has continued to shrink following the Great Recession, widening the wealth gap in the Garden State.

The data, released Thursday, is part of the most recent 2010 to 2012 American Community Survey, a three-year sample study of U.S. residents focused on social, economic and housing issues. The new information shows that while the state’s richest residents have prospered considerably since the recession, the state’s middle class has languished.

“What it points to is that a college degree still has substantial value but people are going to have to work harder to get the better paying jobs. In the 1980s and early 1990s those jobs were there for the taking. They’re not there anymore,” said James Hughes, dean of the Edward J. Bloustein School of Planning and Public Policy at Rutgers University. “It’s not quite the hollowing out of the white-collar job industry, but it’s getting close.”
…
• The number of households with an income of more than $200,000 has increased by 112 percent since 2000, and by more than 12 percent since the height of the recession, the most of any income bracket.

• The number of households making less than $100,000 has decreased by tens of thousands since 2000. No income bracket below this level has grown during this period, which Hughes said is at least partly due to the number of people fleeing the state’s cost of living.

• Since the height of the recession, the middle class is shrinking while the state’s poorest and richest income brackets have seen, in some cases, stark increases, signaling that the gap between New Jersey’s rich and poor is widening.

“The post-recession gains have really been led by the more affluent, the people that are high up in corporations,” Hughes said. “They’ve been making gains, and when you look at pure wealth, they’re the stockholders.”

This entry was posted in Economics. Bookmark the permalink.

64 Responses to Middle Class in NJ? Sorry to hear it