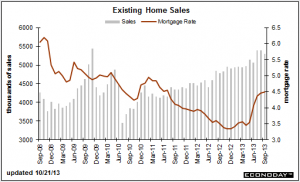 November Home Sales due out from the NAR at 10am this morning. Consensus estimates are for a big drop in SAAR, down from the 5.29m annual pace in October to 5.13m. Estimates range from a dismal 5m to a 5.3m rate.

Post will be updated when the NAR releases more information.