High-end estimates of loan-level delinquency timelines show that approximately 98,000 seriously delinquent mortgage loans may be facing some degree of exposure to foreclosure statutes of limitations in Florida, New Jersey, and New York—three of the states that were hit hardest by the foreclosure crisis, according to Black Knight Financial Services’ January 2016 Mortgage Monitor released Monday. 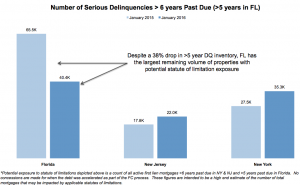 The courts are currently deliberating in those three states discussing the specifics of how the statues of limitations laws apply to foreclosures. In Florida, the foreclosure statute of limitations applies to mortgages that are five years or more overdue, while in New York and New Jersey, it applies to mortgages that are six or more years past due.

According to Black Knight, Florida has the largest volume of loans facing possible exposure to statutes of limitations with roughly 40,000, despite experiencing a 38 percent reduction over the past 12 months. For New York and New Jersey, the number of such loans is currently 35,000 and 22,000, respectively, after both experienced increases over the previous 12 months due to “limited resolution in severely delinquent loan populations” in both states, Black Knight reported.

“Without taking into account additional carrying costs and/or fees incurred by mortgage servicers, Black Knight estimates the current potential unpaid principal balance (UPB) risk exposure in these three states at approximately $30 billion, concentrated primarily in private-label securities,” Black Knight stated in the report. “As it stands today, roughly $1 out of every $10 of principal in private-label securitizations in these three states is tied to a mortgage that is more than five years delinquent in Florida or more than six years delinquent in New York and New Jersey.”

According to Black Knight, 37 percent of the loans that are more than five years delinquent in Florida are not actively involved in foreclosure, which depending on court rulings, potentially presents additional risk. For New York and New Jersey, the share of loans more than six year delinquent but not actively in foreclosure are 22 percent and 21 percent, respectively.