Is it a bubble yet?

How High Are Real House Prices?

“Home prices are back to near-record highs across the U.S.” said the Wall Street Journal in a June 1 front page story. They are, indeed, when measured in nominal terms. The Case-Shiller National House Price Index for the first quarter of 2016 is as high as it was in September, 2005 in the late-phase frenzy of the bubble. That was only nine months before the 2006 bubble market top, followed, as we know too well, by collapse. In addition to reaching its 2005 level, the National House Price Index has gone back to well over its trend line. All this is shown in Graph 1.

Are high house prices good or bad? That depends on whether you are selling or buying. If you are the Fed, it depends on how much you believe that creating asset price inflation actually leads to “wealth effects” and economic growth.

Of course, besides asset price inflation, the Fed truly believes in regular old inflation. It has often reiterated its intent to create perpetual increases in consumer prices. Since the bubble top in 2006, the Consumer Price Index has increased by an aggregate of 17%.

This means that house prices measured in real, inflation-adjusted terms look different from Graph 1. Real house prices from 1987 to now are shown in Graph 2. They have gone up a lot in the last few years, but not as much as in nominal terms. They have reached their level of October, 2003, rather than September, 2005. 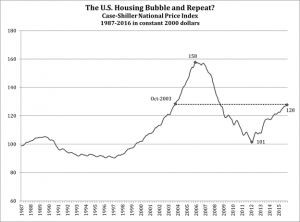 59 Responses to Is it a bubble yet?