(grim’s note: While the Altos numbers are a welcome addition, realize that they are month over month numbers, which tend to exhibit strong seasonality with regards to price and inventory. These numbers are hard to use (and potentially confusing/misleading) without seasonal context.)

This month’s housing data confirms what we’ve been saying for some time: the mini-“boom” of this spring was created by seasonal demand, with some extra help from pressure to meet deadlines for capitalizing on tax credits. Now that those are gone, buyer activity has all but come to a standstill. 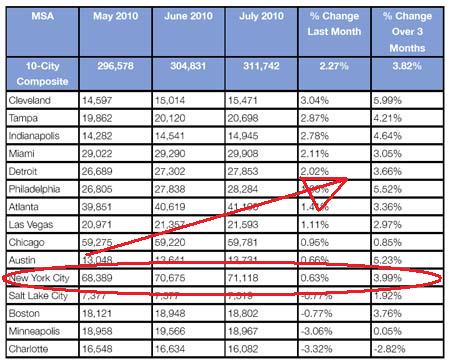 (click to enlarge)
This entry was posted in Economics, New Jersey Real Estate. Bookmark the permalink.

55 Responses to Altos: NY Metro July Prices Down, Inventory Up