Don’t Count On Housing Appreciation To Finance Your Retirement

This Economic Letter discusses some of the factors that appear to be driving the secular decline in the personal saving rate. These factors include rapid increases in stock market and residential property wealth, which households apparently view as a substitute for the quaint practice of putting aside money each month from their paychecks. Rapidly rising stock and house prices, fueled by an accommodative environment of low interest rates and a proliferation of “exotic” mortgage products (loans with little or no down payment, minimal documentation of income, and payments for interest-only or less) have sustained a boom in household spending and provided collateral for record-setting levels of household debt relative to income.

Going forward, the possibility of cooling asset markets and rising borrowing costs may cause the personal saving rate to revert to levels which are more in line with historical averages. While such a development would act as near-term drag on household spending and GDP growth, an increase in domestic saving would help correct the large imbalance that now exists in the U.S. current account (the combined balances of the international trade account, net foreign income, and unilateral transfers). 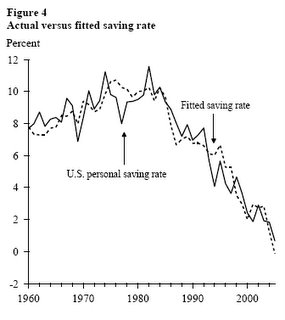 Figure 4 suggests that the decades-long decline in the U.S. personal saving rate is largely a behavioral response to long-lived bull markets in stocks and housing together with falling nominal interest rates over the same period. Since 2000, the rate of residential property appreciation has been more than double the growth rate of personal disposable income. In many areas of the country, the ratio of house prices to rents (a valuation measure analogous to the price-earnings ratio for stocks) is at an all-time high, raising concerns about a housing bubble. Reminiscent of the widespread margin purchases by unsophisticated investors during the stock market mania of the late-1990s, today’s housing market is characterized by an influx of new buyers, record transaction volume, and a growing number of property acquisitions financed almost entirely with borrowed money.

The decline in the U.S. personal saving rate and the dearth of internal saving raise concerns for the future. In coming decades, a growing fraction of U.S. workers will pass their peak earning years and approach retirement. In preparation, aging workers should be building their nest eggs and paying down debt. Instead, many of today’s workers are saving almost nothing and taking on large amounts of adjustable-rate debt with payments programmed to rise with the level of interest rates. Failure to boost saving in the years ahead may lead to some painful adjustments in the future when many of today’s workers could face difficulties maintaining their desired lifestyle in retirement.

Came across this image at Bubble Meter, it’s a Freddie Mac Ad that ran in the Washington Post earlier this week.. 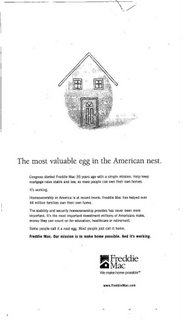 Frankly, I’m disgusted. I really don’t know what to say. Thousands of Americans stand to be cheated out of their retirement because they put their faith in these fools. Has anyone ever seen any investment paperwork that didn’t carry the disclaimer:

“Past performance is no guarantee of future results”

Why can the housing industry make these claims so blindly without being held responsible?