Slowdowns Reported Across The Nation

How many readers have ridden Freefall at Great Adventure? You know the part when you hit the top of the structure, pause, and then hear the signal? That’s exactly where the North Jersey market is right now… 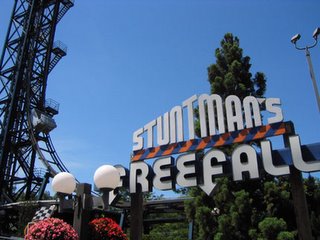 It would seem that the froth seen in some metro areas is more nationwide than the experts predicted. We all knew it, and I think they did too, they just wouldn’t acknowledge it in the press. While there may have a handful of areas not affected(the fly-over states, etc), believe me when I say we are sitting right on top of a whopper. Many of us have noticed similar trends locally in Northern NJ. Inventory continues to creep upward going into the traditionally slow winter season and price reductions are becoming expected.

The Week In Review:

Housing market cools … along with weather

Now the Phoenix market has cooled substantially, and there are signs the housing boom is fading in many parts of the country. The question is whether the slowdown is the beginning of a potentially damaging decline in sales activity and prices predicted by some experts, or whether the market will regain momentum again in the spring as it often does.

New data released yesterday show that in the past year, home sales in the Washington region have declined sharply, the inventory of unsold homes is up significantly, and prices have flattened and, in some cases, fallen.

The luxury home builder said it will cut its fiscal 2006 earnings forecast and will build fewer homes next year because of softening demand and tighter building restrictions, raising concerns of a housing slowdown.

The Massachusetts housing market will slump over the next two years, with prices falling slightly, then flattening before resuming modest appreciation, according to an economic forecast released yesterday.

Home buyers may have a little more wiggle room these days.

Housing prices are leveling off, the supply of homes is going up, and the demand for new homes is dropping.

A rapid price decline can bring equal parts pain and pleasure to homeowners. A buyer who used a creative mortgage plan to purchase an expensive house, while paying on the interest only, may find their property not appreciating fast enough to sell before their mortgage rates increase. Many sellers and realtors are already offering discounts, gifts, and other tricks to get deals closed.

Sales of existing homes in Metro Detroit fell 7 percent in October and houses languished on the market for an average of 101 days as buyers retrenched in the face of more bad economic news.

Investors trying to shed their lots offer incentives while builders competing with them slash prices.

In Ballantrae, Pasco County’s bestselling neighborhood of new homes in the past year, signs of a real estate boom could be starting to sputter. And that could be good news for house hunters put off by high prices and poor selection for the past couple of years.

Metropolitan Phoenix home prices dipped slightly in October, signaling the housing market has likely peaked. The median price of an existing house inched down 1 percent in October to $259,900, according to the Arizona Real Estate Center at Arizona State University’s Polytechnic campus. The median Valley home price was $263,000 in September.

“Some kind of adjustment has to happen,” said Gene Huang, chief economist of FedEx. “Home prices have been growing so fast for so long, outstripping income growth for many years.” Over the long term, Huang said, house prices do not rise much more quickly than incomes.

Don’t look now, but that whistling sound you’re hearing is the air leaking out of the housing bubble.

12 Responses to Slowdowns Reported Across The Nation