A ‘Fundamental’ Look At Home Values

It’s been a rather quiet weekend on the New Jersey Bubble news front. I’ve had a few things on the back-burner, so now seems like a good time to pull them out. This first one is on the fundamentals that govern home prices.. Let’s take a look.

Historically, home values have tracked three different fundamentals very closely, the relationship is well known, and the reasons behind them are sound. Those three fundamentals are local wages, local rents, and inflation. Wages and rents are the obvious fundamentals, so let’s take a quick look at those first.

Local wages and rents are tightly intertwined. If wages rise, it’s likely a sign that rents will rise shortly there after. Likewise, increased rental prices put wage pressures on local employers (I personally think this scenario is all but impossible in many areas, it would require that the entire local rental stock be controlled by a monopoly). But both typically move together rather tightly. Over the past few years, wage increases have been minimal, as have rental increases.

As you can see, median wages have been relatively flat. So lets take a look at how median rents have moved.

So it’s pretty obvious, both rents and wages stayed pretty much confined and in-check throughout the housing bubble. The wage and rent fundamentals are still pretty tightly bound.

So that leaves inflation. Housing has always been thought of as a hedge against inflation, but seldom much more than that. A chart by Shiller that appeared in the NYT illustrates that very well. 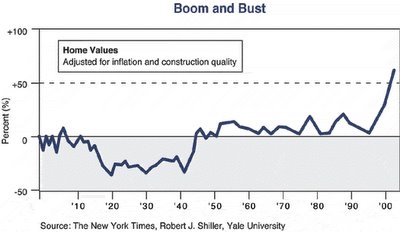 Aside from that little dip we refer to as the Great Depression”, it’s obvious that home values have appreciated at rates slightly higher than inflation. Had inflation significant increased since 1990, we wouldn’t have seen the spike. Now, I’m sure we can get into an argument about how the government is keeping the inflation calculations low so it doesn’t need to pay COLA, but I’d prefer to table that one..
Caveat Emptor!
Grim

18 Responses to A ‘Fundamental’ Look At Home Values