AKA: Why you should ignore your Realtor and everything the National Association of Realtors Says

David Lereah was the Chief Economist for the National Association of Realtors (NAR) up until April 2007, the time period otherwise known as the “Bubble”. His outrageously bullish forecasts earned him the name: Baghdad Bob of real estate.

His continually rosy forecasts, in the face of a rapidly deteriorating market even led some to start blogs to keep track of his spin, the David Lereah Watch was probably the most famous of these.

Criticism wasn’t coming from bloggers alone, mass media journalists routinely took aim at Lereah, and even his successor Larry Yun, one of the most scathing appeared in Slate: 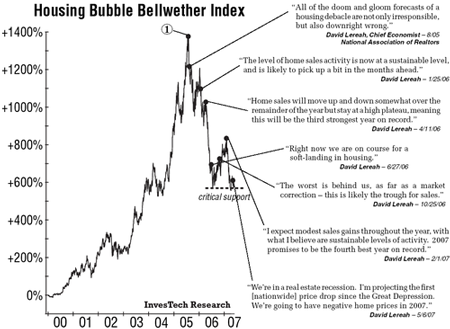 Our own RentingInNJ came up with his own compilation, which spurred the wildly popular (one of the most widely linked and traffic’ed NJREblog posts ever):

1. “There’s no question there is a strong demand for housing from a growing population.” – David Lereah, NAR Chief Economist

2. “For the foreseeable future, the demand for homes will continue to outstrip supply” – Al Mansell, NAR President

3. “We’ve been expecting sales to remain at historically high levels, but this performance underscores the value of housing as an investment and the importance of homeownership in fulfilling the American dream.” – David Lereah, NAR Chief Economist

Which leads up to the January 2009 issue of Money Magazine, where Lereah admits what we’ve already known:

As chief economist for the National Association of Realtors, David Lereah was famously optimistic. Now a private consultant, he’s abandoned what he calls the “positive spin.”

Q: Were you wrong to be so bullish?

A: I worked for an association promoting housing, and it was my job to represent their interests. If you look at my actual forecasts, the numbers were right inline with most forecasts. The difference was that I put a positive spin on it It was easy to do during boom times, harder when times weren’t good. I never thought the whole national real estate market would burst.

Q: The NAR’s latest forecast calls for a slight increase in home prices next year. Thoughts?

A: My views are quite different now. I’m pretty bearish and have been for the past year and a half. Home prices will continue to drop. I think we’ll see a very modest recovery in sales activity in 2009. But we’ve still got excess inventories, a bad economy and a credit crunch that will push prices down further, another 5% to 10% more. It’ll take a long time to get back to the peak prices we saw in many markets.

A: I would not have done anything different. But I was a public spokesman writing about housing having a good future. I was wrong. I have to take responsibility for that.

Some fun threads from back in time:

This entry was posted in Housing Bubble, National Real Estate. Bookmark the permalink.