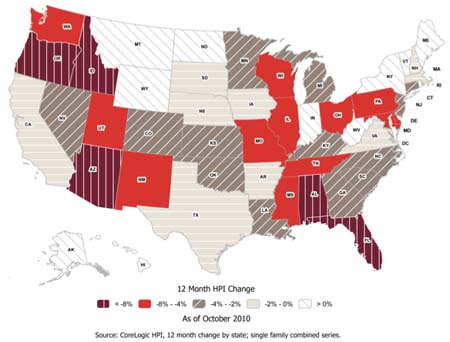 Home prices decline for 3 months in a row

October home prices fell for the third straight month, according to an index maintained by mortgage data aggregator CoreLogic.

The 3.93 percent year-over-year decline in the CoreLogic Home Price Index was significantly greater than the 2.43 percent slip registered in September, and left home prices down 30.2 percent from their April 2006 peak.

Excluding distressed sales, national home prices were down 1.5 percent in October 2010 compared to a year ago, with a 20.9 percent decline from peak.

Home prices declined 3.93% in October from the previous three months, the third straight report of declines as any hope for a recovery in early 2011 begins to fade, according to data from CoreLogic.

Prices slipped 2.8% in September and 1.1% in August. CoreLogic’s Chief Economist Mark Fleming said without the artificial support of the government, the housing market continues to show signs of weakness.

“When you combine these factors with high shadow and visible inventories, the prospect for a housing recovery in early 2011 is fading,” Fleming said.