The dividing line between haves and have-nots in home ownership: Education, not student debt

There is widespread concern that student loans are a drag on the housing market. Leading economic thinkers, including Larry Summers and Joe Stiglitz, have linked the slowdown in homeownership among young people to high levels of student debt.[i] They recommend easing loan burdens to keep student debt from acting as a brake on the economy.

But is student debt really hampering the housing recovery?

Frequently-cited analyses from the Federal Reserve Bank of New York do not provide compelling evidence for this hypothesis, since they rely on data in which college attendance is unobserved. The results are biased by unobserved variation in educational attainment, which is correlated with both home ownership and student borrowing. Better data from the Board of Governors of the Federal Reserve System nullify their key finding.[ii]

First, some background. A few years back, a blog post from the Federal Reserve Bank of New York fanned fears that student debt was holding back the economic recovery.[iii] The post compared homeownership rates of those with and without student debt. The key graph showed that, during the recession, homeownership took a sharp nosedive among 30-year-olds holding student debt, dropping faster than it did among those who did not hold student debt.[iv]

Many read into this graph that student debt is dragging down the housing investments of the college-educated, making them worse off than those who went to college and did not borrow.

But this graph and its underlying data do not (and cannot) show that debt is decreasing home ownership among the college-educated. Why not? These data contains zero information about education. Lumped together in the “No student loan debt” group are a) people who went to college yet did not borrow and b) people who never went to college. The composition of both of these groups is changing over time.

This odd comparison reflects the limitations of the data on which it is based: credit reports. Credit reports do contain detailed information about debt, including student loans, mortgages, credit cards and car loans. But they say little about the borrower herself. In particular, they include zero information about education.
…
Researchers at the Board of Governors of the Federal Reserve System (Alvaro Mezza, Kamila Sommer and Shane Sherlund) pulled together the data needed for precisely this comparison.

The researchers combined credit reports with data on college attendance from the National Student Clearinghouse (NSC). These NSC data are nearly a national census of college attendance and are used extensively by researchers.[v] The NSC data include college enrollment information for all college students, not just those who borrow. 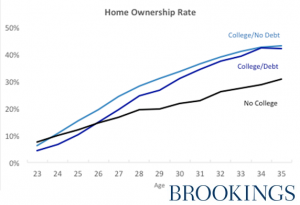 101 Responses to Brookings: Student loan debt not holding back homeownership