CoreLogic® (NYSE: CLGX), a leading global property information, analytics and data-enabled solutions provider, today released the Home Equity Report for the fourth quarter of 2017, which shows that U.S. homeowners with mortgages (which account for roughly 63 percent of all properties, according to a 2016 American Community Survey) have seen their equity increase 12.2 percent year over year, representing a gain of $908.4 billion since the fourth quarter of 2016.

“Home-price growth has been the primary driver of home-equity wealth creation,” said Dr. Frank Nothaft, chief economist for CoreLogic. “The CoreLogic Home Price Index grew 6.2 percent during 2017, the largest calendar-year increase since 2013. Likewise, the average growth in home equity was more than $15,000 during 2017, the most in four years. Because wealth gains spur additional consumer purchases, the rise in home-equity wealth during 2017 should add more than $50 billion to U.S. consumption spending over the next two to three years.”

Negative equity, often referred to as being “underwater” or “upside down,” applies to borrowers who owe more on their mortgages than their homes are worth. Negative equity can occur because of a decline in a home’s value, an increase in mortgage debt or both. Negative equity peaked at 26 percent of mortgaged residential properties in the fourth quarter of 2009, based on the CoreLogic equity data analysis which began in the third quarter of 2009. 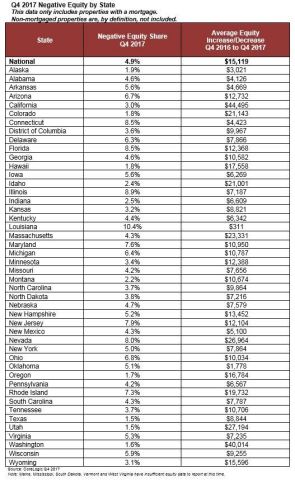 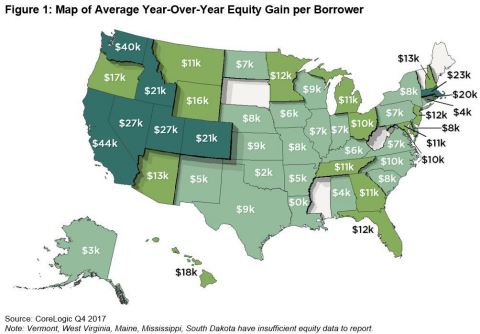 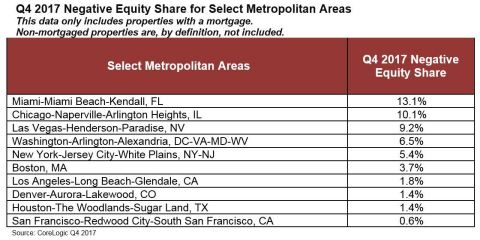