Can small business thrive in NJ? 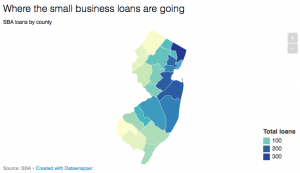 Which are the hottest counties in N.J. for new business?

Hank Sauce is made in small batches by hand, when the restaurant in Sea Isle City run by Josh Jaspan and his two former college roommates closes for the off season.

Soon, however, Jaspan, Matt Pattaluga, and Brian “Hank” Ruxton—a chef who created the hot sauce bearing his name, expect to open a production facility in Millville’s Urban Enterprise Zone with the help of a $695,000 loan backed by the Small Business Administration.

Jaspan, who said the money will provide working capital for their growing operation, said they faced limited options when they looked to finance their expansion.

“When it comes time to grow and all the options are on the table, you can give equity and give up part of your company to whoever wants to invest, or you can go to the bank and try to get a loan,” he said.
…
Jaspan had a lot of company this year. The SBA said it approved a record $869 million in loans to New Jersey small business owners in fiscal year 2017, which ended Sept. 30.

Overall, the agency approved 2,326 loans, compared to 1,755 loans totaling $806 million in the last fiscal year. Officials said it was the first time since 2008 that the New Jersey office approved more than 2,000 loans.

He said 18 of 21 counties saw increases in the number of loans that were made. “It tells us our lending programs are making an impact,” said Blackstock.

54 Responses to Can small business thrive in NJ?